Does a Healthy Lifestyle Result in “Anti-Aging”? Part 1

I have a question for you: Do you think that a healthy nutritional diet and physical activity may slow down, even drastically slow down, the aging process? If you said no, go stand in the corner!

First let me make a disclaimer: There is no such thing as “anti-aging”. That would suppose we could make time stand still. I also hear “turn back the clock” with this or that product. Unless you can time-travel that is not feasible. BUT, we most certainly can slow down the aging process and repair much of the damage our typical American lifestyle causes. 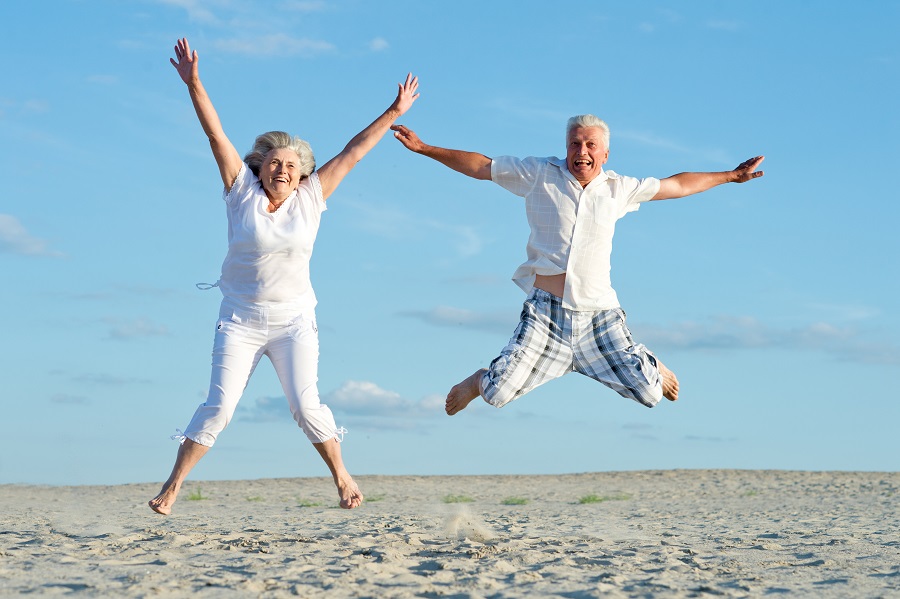 Well, I have some good news and some bad news. The bad news is you are about 10 seconds older than when you started this paragraph. So let’s deal with that fact. Of the trillions of cells in your body about 25 MILLION died in that 10 seconds! For each of those cells that died, it replaced itself with a replica cell. Each replica cell has a “Telomere” that is shorter than the parent cell. And when that cell dies and replicates the Telomere will be again shorter. Confused? Let’s clear it up with a short primer on Telomeres.

Every cell in your body contains a nucleus, and inside the nucleus are the chromosomes that contain your genes. The chromosome is made up of two “arms,” and each arm contains a single molecule DNA, which is essentially a string of beads made up of units called bases.

A typical DNA molecule is about 100 million bases long. It’s curled up like a slinky, extending from one end of the chromosome to the other. At the very tip of each arm of the chromosome is where you’ll find the telomere.

If you were to unravel the tip of the chromosome, a telomere is about 15,000 bases long at the moment of conception in the womb. Immediately after conception your cells begin to divide, and your telomeres shorten each time the cell divides. Once your telomeres have been reduced to about 5,000 bases, you essentially die of old age.

As stated in The Immortality Edge:

“Telomeres keep our chromosomes intact, in the manner of the plastic caps that hold the ends of shoelaces together. As cells divide and replicate, telomeres eventually shorten; when they become too short, cells die.”

Ok, that’s the bad news. Here’s the good news (depending on what you do with it).

Your Lifestyle Can Speed up or Slow Down the Aging Process

Obesity, lack of exercise, psychological stress and smoking all cause production of free radicals, which can cleave telomeres and significantly speed up the telomere-shortening process. But that’s not all. Several studies have now linked chronic psychological stress with accelerated telomere shortening, which helps explain the well-documented detrimental effects that stress has on your health.

One such study, led by Nobel Laureate Elizabeth Blackburn, was published in the Proceedings of the National Academy of Sciences in 2004. They found that female caregivers who reported very high levels of perceived stress had shorter telomeres in their lymphocytes (key cells of your immune system)—equivalent to one decade of additional aging—compared to women reporting low stress levels!

A recent University of California press release also mentions other studies relating to psychological stress and telomere shortening, including one that examined people with chronic post-traumatic stress disorder (PTSD).

The Age-Reversing Power of Vigorous Exercise

This is truly exciting news! The buffering effect of exercise on telomere shortening was confirmed again just last year. This study included 63 healthy post-menopausal women, and found that “vigorous physical activity appears to protect those experiencing high stress by buffering its relationship with telomere length (TL).”

In fact, among the women who did not exercise, each unit increase in the Perceived Stress Scale was related to a 15-fold increase in the odds of having short telomeres. Those who did exercise regularly showed no correlation between telomere length and perceived stress!

Greta Blackburn’s book The Immortality Edge: Realize the Secrets of Your Telomeres for a Longer, Healthier Life further details the importance of high-intensity exercise to prevent telomere shortening. The book also offers specific recommendations regarding supplements, diet, and stress-reduction techniques along with clear explanations of the science behind the recommendations.

This is truly a fascinating and groundbreaking realm of longevity research, as being able to reduce telomere shortening—essentially stopping the cellular aging process that eventually kills you—is one of the most promising anti-aging strategies we know of to date.

Much of the research surrounding telomeres is focused on turning on a gene that produces the enzyme telomerase. Your reproductive cells, which contain telomerase, do not undergo the same telomere shortening process that other cells do. So researchers are now screening different chemicals for their ability to turn on the telomerase gene in an effort to develop the first true anti-aging drug.

In the meantime, however, high-intensity exercise appears to be the most effective all-natural approach to slow down the aging process by reducing telomere shortening. In fact, research has shown there’s a direct association between reduced telomere shortening in your later years and high-intensity-type exercises. In a study published in Mechanisms of Aging and Development, the authors’ state:

Avoid being fooled like 95 percent of those that are exercising. Traditional cardio is not your best bet at improving your health and life, high intensity exercises are.

The key to performing them properly is to raise your heart rate up to your anaerobic threshold. You keep pushing at maximum effort for 20 to 30 seconds, and then recover for 90 seconds. The cycle is then repeated for a total of eight repetitions. Because it is very difficult to accurately measure your heart rate when it is this high it would be best to use a heart rate monitor until you are comfortable with precisely the amount of exertion you need to reach your target zone.

Next week I’m going to share with you the very exciting news of how and why proper nutrition and supplementation will slow down this aging process and deliver us from many common diseases that are currently plaguing us. I will cover specifics, so be sure not to miss it.